Cardinal Cupich today unveiled a new anti-violence initiative sponsored by the Archdiocese of Chicago that has Pope Francis' personal stamp of approval.

Speaking to media gathered at the Peace Corner Youth Center in Chicago's Austin neighborhood, Cardinal Cupich announced he was giving $250,000 of Archdiocesan discretionary funds to the new "Instruments of Peace Venture Philanthropy Fund." The donation will serve as seed money to fund new anti-violence initiatives and existing programs in cooperation with community and civic organizations.

"We should leverage our presence and footprint in the community," Cardinal Cupich said.

The Cardinal said he had discussed Chicago's struggles with Pope Francis, and read from a personal letter from the pope.

"Please convey to the people of Chicago that they have been on my mind and in my prayers," Pope Francis wrote. "I know that many families have lost loved ones to violence. I am close to them, I share in their grief, and pray that they may experience healing and reconciliation through God's grace."

The city in 2016 experienced 802 homicides, and so far has seen 131 individuals slain in 2017, according to figures provided by the Archdiocese of Chicago. Cardinal Cupich noted that Catholic Charities' Peace Corner, which offers after-school programs, community-service projects and summer jobs, stands at the dividing line between rival gang territories.

Cardinal Cupich cited a recent study by the Metropolitan Planning Council that noted that as one of the most segregated cities in the nation, Chicago is suffering both personal and economic costs. The report indicated the city's homicide rate would drop by 30 percent if the level of segregation were reduced to the national median, while the income for African Americans in the Chicago area would increase an average of $2,982 per person.

He said the peace-promotion efforts will trickle down to the parish level, as lay Catholics will gather in groups to tackle issues of racism, poverty and violence. 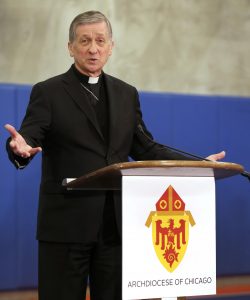 "Broad gestures and sweeping rhetoric will not solve the problem," Cardinal Cupich said.

Included in the efforts will be a reboot of the sports-oriented Catholic Youth Organization, the addition of an anti-racism component to religious education programs found in Catholic schools and parishes, and the opportunity for summer jobs in parishes, Catholic Charities and other agencies.

He said he chose today to announce the new enterprise since it marked the 49th anniversary of the assassination of Dr. Martin Luther King, Jr.

The Cardinal will jump-start the peace efforts with a "Walk for Peace" through the Englewood neighborhood on Good Friday. The walk will be based on the Stations of the Cross, but will honor victims of violence. Pope Francis in his letter promised to accompany Chicago residents in prayer when he walks the Way of the Cross in Rome that day.

Cardinal Cupich said he had briefed Chicago Mayor Rahm Emanuel and law enforcement officials on the new program, and had their support. The $250,000 donation marks about half of the money currently in the discretionary fund, which is made up of accumulated personal donations to the Archbishop of Chicago to use as he sees fit. This is the largest block of money ever dispersed for one project, according to the Cardinal.

He brushed aside any potential doubts of the Archdiocese making any significant dent in the city's problems.

"Just because we can't do everything doesn't mean we can't do anything," Cardinal Cupich said.

(Photo of Cardinal Cupich at podium by Karen Callaway of Chicago Catholic.)