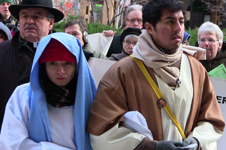 The Conference advocates on behalf of many public policy areas, such as cemeteries, health care, immigration, peace and social justice, prison and jail ministry, and senior issues.
Marilou Gervacio serves as the CCI staff member for most of the Ad Hoc Committees.

Many Catholic dioceses and local parishes own and operate cemeteries. The Conference monitors changes to the state’s Cemetery Oversight Act administered by the Illinois Comptroller’s Office, as well as other legislation affecting Catholic cemeteries.

Although not a formal department or ad hoc committee, health care issues are tracked by the Conference in conjunction with the Illinois Catholic Health Association.

CCI seeks to protect the right of religious conscience for faith-based providers and to oppose efforts to mandate services that violate Church teaching. The Conference supports the Illinois Health Care Right of Conscience Act, which allows physicians, nurses and other health care personnel to refuse to participate in certain medical procedures because of conscience objections.

We support health-care coverage for low-income, uninsured individuals and families, and work on behalf of just reimbursement payments in the state-federal Medicaid program for hospitals and nursing homes.

The Conference coordinates the Catholic Campaign For Immigration Reform–Illinois Statewide Network, which is composed of representatives of each diocese who minister to an advocate on behalf of immigrants.

CCI works in support of legislation and policies that respect the dignity of immigrants who live and work in Illinois. We also support comprehensive immigration reform, and advocate for keeping immigrant families together amid the threat of deportation.

The Conference promotes efforts to increase affordable housing for low-income families in Illinois, and then maintain that housing. We also support efforts that protect the dignity of workers and promote justice in the workplace.

The Conference coordinates the Illinois Catholic Prison and Jail Ministry Network, which is made up of representatives from each diocese who minister to prisoners and inmates.

We support initiatives for restorative justice, which focuses on the needs of victims, offenders and the involved community in an attempt toward rehabilitation as opposed to punishment. CCI also seeks to reduce recidivism among ex-offenders through such programs as literacy tutoring and job training.

Read our page on this ministry.

CCI supports public policy and legislation that establish and promote a spectrum of senior citizen living arrangements, including assisted living and supportive living.

We also advocate for programs that help senior citizens maintain their independence within their communities for as long as possible.