The Sanctity of Human Life 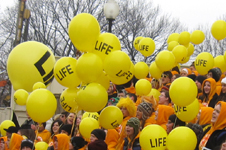 The Catholics for Life Department supports legislative efforts designed to reduce and eventually eliminate abortion. It opposes legislation or other policy initiatives that undermine the sanctity of human life at any stage from conception to natural death.

Lawmakers in 2011 voted to abolish the death penalty and the governor signed the legislation into law. CCI opposes any reinstatement of the punishment.

Likewise, the Conference supports the 1995 Parental Notification of Abortion Act, which calls for parents or guardians to be notified 48 hours before a girl under 18 has an abortion. The law immediately was drawn into an 18-year court battle, which ended in July 2013 after the Illinois Supreme Court ruled the law could finally be implemented. The law took effect August 15, 2013.

The department also works to defend the Illinois Health Care Right of Conscience Act, which allows physicians, nurses and other health care personnel to refuse to participate in certain medical procedures because of conscience objections. The Catholic Conference prevented the law from being stripped of all authority by negotiating a less hostile amendment to the law during the 2015 and 2016 legislative sessions.

Zach Wichmann serves as the CCI staff member for the Catholics for Life Department.

Representatives from each diocese make up the Catholics for Life Department.

Alexandra Kurator serves as the current chair of the department.