Promote Marriage and Strengthen the Family 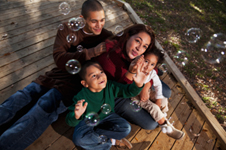 The Marriage and Family Life Department is CCI’s newest department. It was created by the bishops to support policies that promote marriage and strengthen the family. It opposes policies that undermine marriage as a sacred union between one man and one woman.

The department also seeks better conscience protections for Church agencies in regards to Illinois’ civil union law, which went into effect June 1, 2011. Catholic Charities have been cut off from state-funded foster care and adoption contracts because of a dispute over the law’s religious exemption.

Efforts to strengthen conscience protections have redoubled since the state’s marriage law was redefined from “between a man and a woman” to “between two persons.” The new law went into effect on June 1, 2014. However, a Cook County judge in February 2014 ruled that same-sex couples in that county did not have to wait until June to obtain a marriage license. The Illinois attorney general later reinforced that decision, prompting other counties to also issue marriage licenses early.

Deacon Richard Hudzik serves as the current chair of the department.

In November 2012, the Marriage and Family Life Department issued its Marriage Toolkit, a resource for clergy, parish staff and the laity.

The toolkit is designed to help Catholic individuals and parish communities understand, explain and promote the Catholic Church’s answers to the following questions:

The toolkit is separated into seven individual sections:

The entire toolkit can be downloaded here.