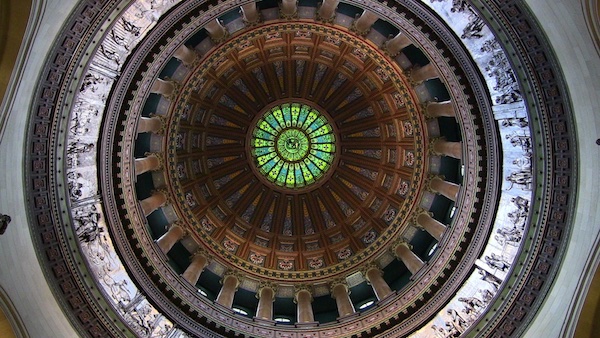 Illinois lawmakers wrapped up an abbreviated session early today, in which they crafted a $42.8 billion budget reliant on borrowing for an upcoming fiscal year that is shrouded in uncertainty wrought by the ongoing global coronavirus pandemic.

The unusual circumstances saw the House meeting in the Bank of Springfield Convention Center in order to maintain social distancing, while the Senate met at the state Capitol but with only 10 members at a time occupying the chamber. All lawmakers wore masks throughout the four-day session, except for state Rep. Darren Baily, R-Xenia, who was expelled on Wednesday for forgoing the protective facial covering. He returned on Thursday to continue the session, wearing a mask.

The budget set to take effect July 1 relies on $5 billion in borrowing authorized by Senate Bill 2099 from a special Federal Reserve fund created to aid state governments during the pandemic. However, the move comes with some risk, as legislators are relying on federal monies earmarked for states in an uncertain yet potential additional stimulus package from Congress to pay off the debt.

Included in the fiscal year 2021 spending plan laid out in Senate Bill 264 is a $58 million increase in the state’s Community Care Program (CCP), which allows senior citizens to remain in their own homes instead of going to a nursing home. Catholic Charities of Chicago is a longtime provider of the program. The increase in the program’s total $925 million appropriation calls for rate increases for homemaker and adult day services, as well as transportation costs. The hike allows CCP providers to increase the pay for workers to $14 an hour come Jan. 1.

The largely maintenance-level budget also increases funding for the Illinois Department of Public Health as it tests for and tracks COVID-19 infections, as well as for the Department of Children and Family Services, with rate increases for foster care providers and additional monies for new investigators and case workers and to bolster family preservation services. The Department of Human Services also sees an increase, primarily for hiring additional workers to process new claims for Medicaid eligibility brought on by newly unemployed residents.

Funding for both K-12 and higher education is held at FY 2020 levels, despite a provision in the evidence-based funding formula for primary and secondary grades calling for an additional $350 million to be added each year. However, K-12 schools will receive the same amount of state dollars as they did this year.

Additionally, direct-care workers at homes for the developmentally disabled – such as Misericordia in Chicago – will get a raise of 26 cents per hour through a rate increase to providers as authorized by the Budget Implementation Act (BIMP) outlined in House Bill 357. The BIMP authorizes state agencies to carry out the budget. Come July 1, workers will get another increase of $1 per hour, and a 50-cent raise on Jan. 1.

HB 357 also allows undocumented immigrants over the age of 65 to participate in Medicaid, the state-federal health insurance for the poor and disabled. Illinois becomes the first state in the nation to offer Medicaid to the undocumented senior population.

The BIMP also creates the Business Interruption Grant program (BIG) as a vehicle to distribute at least $540 million in federal funds to small businesses as authorized in the Coronavirus Aid, Relief and Economic Security, or CARES, Act. Businesses that have suffered significant losses due to restricted operations, mandatory closures or property damage caused by the COVID-19 pandemic may apply for the $10,000 to $20,000 grants from the Illinois Department of Commerce and Economic Opportunity.

The BIMP also gives the governor additional discretionary authority over the spending of state funds throughout the budget by allowing him to shift up to 8 percent of an appropriation to another purpose – an increase from the usual 2 percent.

The economic and social wreckage created by the ongoing coronavirus pandemic shaped nearly every proposal considered by the legislature. Earlier in the week, the Illinois Department of Economic Security announced the state’s unemployment rate for April reached 16.4%, the highest rate recorded since the modern system of tracking joblessness began in 1976.

Setting its sights on employers who don’t provide adequate COVID-19 protection for employees, House Bill 2455 creates a “rebuttable presumption” that a first-responder or essential worker who contracts the disease did so in the course of their employment. Employers, however, would have recourse to rebut the employee’s workers’ compensation claim, which does not normally cover illness.

That recourse includes demonstrating their workplace was following up-to-date public health guidelines for two weeks prior to the employee’s contraction, or that the employee was working from home for a period of at least 14 days prior to the injury claim. Employers also have the opportunity to prove the employee was exposed to the virus by an alternative source outside the workplace.

Lawmakers also sought to protect workers who are assaulted by customers refusing to wear masks or abide by other safety precautions implemented during a public health emergency such as the current pandemic with Senate Bill 471. The measure increases the severity of the charged crime to aggravated battery, which is a felony.

A contentious initiative to expand vote-by-mail for only the Nov. 3 general election passed on a partisan vote after extensive debate in both committee hearings and on chamber floors. Senate Bill 1863 requires Illinois’ local election offices, by Aug. 1, to mail or email vote-by-mail ballot applications to any voter who cast a ballot in 2018, 2019 or 2020, as well as voters who registered or changed addresses after the March primary.

Completed ballots would be returned via mail or in new “collection sites” that would consist of boxes placed in locations at the discretion of local election officials. Regarding voting in person, the bill would allow local election authorities to implement curbside voting, in which voters can drive up, be handed a ballot and fill it out in their cars. The measure also expands the existing Election Day as a state holiday for state employees to include public schools and universities, but only for the 2020 election.

Senate Bill 1569 takes aim at education concerns, including waiving some requirements for educator license applicants and dispensing with a requirement that teacher candidates must student teach in the spring of 2020. The measure also outlines requirements for e-learning programs during a disaster, such as the current pandemic. Although these requirements do not apply to nonpublic schools, it is expected the state recognition process will look at e-learning plans. More information on SB 1569 may be found in this CCI analysis.

Meanwhile, Senate Bill 1864 originally sought to extend telehealth visits allowed by Gov. J.B. Pritzker’s executive order until May 1, 2021, but that language was later stripped out. The measure now loosens certain regulations for the Illinois Department of Healthcare and Family Services during the pandemic, including making it easier for people to prove eligibility for the federal Children’s Health Insurance Program (CHIP) and the state’s All Kids program. It also allows applicants to submit applications over the phone in lieu of a physical signature.

In an effort to help out bar owners, who have not been allowed to offer curbside service like restaurant owners during the stay-at-home order, lawmakers overwhelmingly approved House Bill 2682, which allows cocktails to go for up to a year. Containers have to be sealed and in an area not accessible to the driver, such as the back seat or the trunk. Municipalities may opt out of the measure.

However, a measure offering relief to residential and business renters and landlords failed to advance in the House. Senate Bill 3066 would have implemented a 60-day moratorium on rent and mortgage payments during the ongoing pandemic. The measure also would have allowed judges to consider pandemic-related financial hardships if tenants asked to seal a previous eviction from their record. A past eviction makes it extremely difficult for tenants to rent a home in the future.  Gov. J.B. Pritzker’s executive orders, however, have barred evictions during the pandemic.

House Bill 2174 extends the ending date of practically all current legislation set to sunset by one year, which includes the Cemetery Oversight Act. Meanwhile, House Bill 2455 offers no relief to “voluntarily reimbursable employers” – such as all six Illinois Catholic dioceses – regarding unemployment insurance. The state share of unemployment insurance will still have to be paid by such employers, accounting for 50 percent of the cost of benefits paid to laid-off workers. The measure affects only employers; employees will still receive their full monetary unemployment benefits.

OTHER ISSUES TAKEN UP

Regarding nonpandemic-related legislation, Senate Bill 2541 creates a hospital assessment program set to garner additional hundreds of millions in federal Medicaid reimbursements for so-called “safety-net hospitals” that treat a large percentage of low-income patients. Senate Joint Resolution 1 sets the language for the Illinois constitutional amendment appearing on the November ballot that changes the state’s income tax to a progressive tax from the current flat tax. Lawmakers a year ago approved legislation that detailed the new rates. SJR 1 also presents the language for arguments for and against the amendment that will be printed in a pamphlet mailed to every voter.

Legislators nixed, however, a measure that would have allowed for remote legislating through 2022, replacing the controversial idea with language that simply creates the Restore Illinois Collaborative Commission. Senate Bill 2135 creates the bipartisan panel made up of House and Senate members, which will meet with the Illinois Department of Commerce and Economic Opportunity to participate in the governor’s five-phase “Restore Illinois” reopening plan as the coronavirus pandemic runs its course.

Lawmakers also failed to craft a measure that would replace the rule-driven criminal penalties levied by Pritzker against businesses that failed to comply with his reopening plan. The governor had instituted the emergency rule days before legislators convened in Springfield but withdrew it before a bipartisan, bicameral panel could meet to possibly scuttle it.

No end-of-session time frame would be complete without a gambling bill popping up, and the shortened session did not disappoint. Senate Bill 516 adjusts the tax rates on revenue generated by a Chicago casino, after legislation last year authorizing the city gambling hall scared off any potential investors with its exorbitant rates. The measure garnered strong bipartisan support since the city’s share of revenues is earmarked for funding its police and firefighter pensions, which are set to run out of money in only a few years. SB 516 also allows the Illinois Department of Agriculture to operate video gaming at both the Illinois State Fair and the Du Quoin State Fair.

Lawmakers will return to the state Capitol for the fall veto session on Nov. 17-19 and Dec. 1-3.