Many Chicago-area Catholics were most likely surprised to learn from full-page ads in Monday’s Chicago Tribune and Chicago Sun-Times that abortion is OK by the Catholic Church since it is a social justice issue.

At least that’s what Catholics for Choice, the organization that took out the ads, wants you to think.

But the teaching of the Catholic Church on abortion is the same as it always has been: The Church respects the sanctity of human life, from conception to natural death. 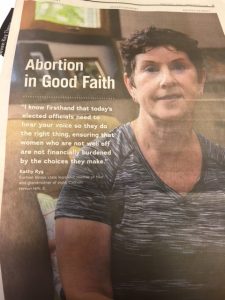 In its ad campaign, “Abortion in Good Faith,” Catholics for Choice features women who profess to be Catholic stating that public funding of abortion is a Catholic social justice value. In the Tribune ad, former Illinois House Rep. Kathy Ryg, D-Vernon Hills, urges readers to contact elected officials “so that women who are not well off are not financially burdened by the choices they make.”

In the Sun-Times ad, a cancer researcher states that she believes in her Catholic faith, and has “faith in others to make the right choices for themselves.”

Similar ads appeared in 18 other major newspapers across the country.

These are obvious attacks on the Hyde Amendment, which since 1976 has been attached to federal appropriations bills to ensure that public funding is not used to pay for or promote elective abortions. This stance has long been supported by the American people, no matter what faith denomination they adhere to.

The Catholic Church has a long history of serving and caring for women of all income-levels who are dealing with an unexpected pregnancy through pregnancy resource centers, maternity homes and adoption. These efforts are rightly labeled as social justice values.

The assault on common sense continued today, as the Sun-Times published an op-ed written by Amy Meek, a lawyer for the ACLU of Illinois, in which she calls for a repeal of the Hyde Amendment. Meek paints elective abortions as health care that is being denied to low-income women because the Hyde Amendment restricts Medicaid abortions to cases of rape, incest, or to save the life of the mother.

"No woman should have to choose between paying rent or the water bill and getting the health care she needs," Meek writes. "For 40 years, the Hyde Amendment has harmed women struggling to make ends meet."

We realize that ads are a paid platform intended to steer individuals toward a specific viewpoint. Op-eds serve the same purpose, but their publication is up to the editorial page of the news outlet.

However, hijacking Catholic social teaching for political gain and labeling abortion as health care are not examples of persuasion – they are lies.

Cardinal Timothy Dolan, chairman of the U.S. bishops’ committee on pro-life activities, further expanded upon these points yesterday in his response to the Catholics for Choice ad campaign. His statement follows:

A Statement from Cardinal Timothy M. Dolan,
chairman of the U.S. Conference of Catholic Bishops' Committee on Pro-Life Activities

An abortion advocacy organization called “Catholics for Choice” (CFC) placed deceptive full-page newspaper ads in multiple cities on September 12 calling for taxpayer funding of abortion in the name of the Catholic faith.

As the U.S. Catholic bishops have stated for many years, the use of the name ‘Catholic’ as a platform to promote the taking of innocent human life is offensive not only to Catholics, but to all who expect honesty and forthrightness in public discourse.

CFC is not affiliated with the Catholic Church in any way. It has no membership, and clearly does not speak for the faithful. It is funded by powerful private foundations to promote abortion as a method of population control.

The organization rejects and distorts Catholic social teaching — and actually attacks its foundation. As Pope Francis said this summer to leaders in Poland, “Life must always be welcomed and protected…from conception to natural death. All of us are called to respect life and care for it.”

CFC’s extreme ads promote abortion as if it were a social good. But abortion kills the most defenseless among us, harms women, and tears at the heart of families. Pushing for public funding would force all taxpaying Americans to be complicit in the violence of abortion and an industry that puts profit above the well-being of women and children.

According to a July 2016 poll conducted by the Marist Institute for Public Opinion, 62 percent of Americans oppose taxpayer funding of abortion, including 45 percent of those who say they are pro-choice.

Finally, the CFC pits the needs of pregnant women against those of their unborn children. This is a false choice. Catholics and all people of good will are called to love them both. Consider supporting local pregnancy help centers, which do incredible work caring for mothers and children alike in a manner consistent with true social justice and mercy.